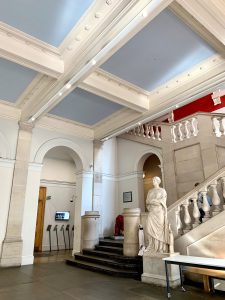 I am a literature major, so I was super excited to study in a city with a long legacy of celebrated authors. At King’s, I registered for two English Literature modules: “First World War Literature” and “US Slavery and the Literary Imagination.”

These modules engage a key question I am interested in answering: What is the relationship between literature and social change? In “First World War Literature,” I learned about how war affects gender norms, social interactions, and the cultural present. My “US Slavery in Literature” module introduced me to the extraordinary literary accomplishments that developed in response to the slave economy and led me to examine issues of representation and gender, as well as the contemporary significance of slave narratives.

In the United States, all of my literature classes were biweekly seminars, where the professor both teaches and facilitates discussions on weekly assignments. At King’s, I have one hour of lecture a week, where the professor gives a thorough presentation on a topic, and one separate hour of seminar, where we discuss the lecture and readings in smaller groups. I liked King’s lectures because they helped me understand the background and research on topics before discussing them. I also liked that King’s allows you to dive into specific subjects that interest you—especially for paper proposals.

Another thing I enjoyed about my study abroad program was that I was only required to take two classes in my major. I wanted spend time exploring other interesting fields at King’s, so I enrolled in “Political Economy in China” to fulfill my Asian American Studies Minor requirement, and it has been extremely interesting to learn how China’s economic globalization interacts with the media, the government, and everyday life in China. I grew up in Taipei, Taiwan which has a complicated relationship with China, and gaining a holistic understanding of Chinese history has allowed me to better understand my own identity as a Taiwanese American.

My fourth module was “Subcultures and Communities in the Digital World.” I had never taken a digital humanities class before, and this module was an incredible introduction to the field. I was especially empowered when learning about virtual activist communities. Utilizing material from my “Political Economy of China” module, I wrote my midterm essay for my “Subcultures and Communities in the Digital World” module on how Chinese feminists use social media as a sub-cultural activist platform.

Overall, the KCL academic system has definitely made me a more independent and initiative learner. Plus, when you’re studying in London, you get to visit places such as the British Library and nerd out over the huge collections of literary manuscripts and archives!