This blog post is among the winners of the Department of Comparative Literatures’s 2020-2021 Blog Award for the module 6ABA0013 ‘Ethiopia and the Horn of Africa in Global Cultural Studies’. Congratulations to Tonje Beisland for winning the award!

Who can claim ownership of modernity? Today, we see clearly the global impact of the technological, social and scientific progresses that characterise modernity. Examples of such development include education, democracy and public and private law. These developments are primarily taught as the emergence of European schools of philosophy that spread to other regions during the Enlightenment period – itself the very ‘sign of the modern’ (Conrad, 999). However, modernity is not necessarily the European invention we are often taught it is. Rather, modernity and the Enlightenment were global phenomena where thinkers from all over the globe were responding to the same new modes of interaction and socio-economic conditions, such as cross-border communication and the movement of global capital (1008–1009).

The origins of modernity can be approached through the theoretical frameworks of ‘diffusionism’ and ‘co-constitution’. The diffusionist model understands modernity as a process which was invented in Europe and then spread to other locations across the globe (1026). These peripheries can only receive modernity; not influence it. Consequently, some of the processes that often characterise our perception of modernity and our understanding of ‘progress’ – whether they be technological inventions, civil freedoms or industrialisation – are portrayed as intrinsically European. Despite its universal significance and global impact, modernity could originate in ‘Western civilization only’ (Weber, xxviii). Diffusionism sees concepts such as modernity to be developing in self-enclosed environments without outside influence. In light of this, the true and authentic modernity is presented as inherently European. Consequently, the diffusionist model demands an essentialist view of identity, where any deviation from this ‘essence’ means alienation from the ‘true’ cultural identity.

The co-constitution model argues that modernity is a global phenomenon. Modernity was co-produced across national, cultural and linguistic borders, and is global in its very nature. This approach argues that modernity came into existence through mutual influence and change, not from a definite centre. It is defined through relationships between different geographic locations. As global interactions increased, largely fuelled by colonialism and other travels, the foundation for exchange of ideas grew and thus opened up for the global development of modernity (Conrad, 1027). With the mutual influence and subsequent gradual changes, there is no inherent essence to return to. The co-constitution model therefore sees identity as something that changes and is not bound to a fixed understanding.

The insistence on cultural authenticity in contemporary debates

These concepts often seem primarily related to scholarly contexts. Nevertheless, we still see the issues the prevalence of the diffusionist approach in many contemporary debates in the media. We often see cultural clashes where people are adamant that there is only one true way to showcase belonging and be culturally authentic. Communication across cultural borders is often perceived as a threat to traditional customs that ‘predate’ the modern era, where many attempts at combining different cultural products are met with criticism that implies alienation from both cultures. This assumption of a fixed and essential identity mirrors the diffusionist approach to understanding our world.

An example of such normative affirmation of cultural traditions happened in Norway in 2016 when politician Sahfana M. Ali posted a photo of herself on Facebook in her new ‘bunad’. The Norwegian national costume has immense symbolic value. It is perhaps the most traditional symbol which is still widely used in a modern lifestyle. The bunad is often connected to someone’s local heritage as well as national identity and has deep sentimental value to many. When Ali posted the photo of her bunad, many people reacted to a hijab she had custom-made to fit the bunad’s traditional embroidery. The photo faced a public backlash, with many claiming that the hijab and the bunad should not be paired. The hijab lacked a historical connection to the bunad while also indicating a connection to other historical and cultural values. However, as was later pointed out by the Norwegian Institute for Bunad and National Costumes, the hijab does not differ very much from other traditional headdresses paired with the bunad. In fact, both the Norwegian headscarf and the hijab share the same origin from the Middle East 3000 years ago and have both been closely connected to religious identity and marriage throughout history. The combination of the costumes can instead be considered a symbol of successful integration where two traditional garments are united as they create a new costume more fitting for modern multicultural society.

This claim to the bunad’s cultural authenticity demonstrates how the diffusionist approach to modern history attempts to paint certain cultural traits as timeless. However, claims to such essentialised identities conceal the larger structures of global interactions ‘that brought about the modern world’ (1008). The fact that the hijab and the bunad’s headscarf have a shared cultural and geographical origin demonstrates the falsity of a narrative which depicts the bunad as inherently Norwegian. To insist on such cultural authenticity would be to deny the intricate processes of engagement across the globe that brought about modernity and our contemporary world – not as a European invention, but as a phenomenon that through mutual global influence gradually developed. 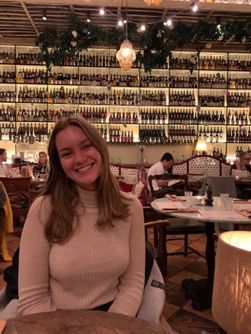 Tonje Beisland is a Norwegian third-year Liberal Arts student majoring in Comparative Literature and minoring in English literature. She is the sub-editor of the independent online publication NUET which offers a wide range of topics centred on self-expression, art and sustainability. She received ‘Garborgprisen’ and the first prize in the Humanities section of ‘Young Scientists’ hosted by the Research Council of Norway for her research on feminism, intersectionality and patriarchy. After starting her BA at King’s College London, her most recent interests have extended to the postcolonial and transnational context of the Caribbean. She is currently working on the application of Greek and Norse mythology in contemporary Caribbean and Norwegian literature for her dissertation and intends to enter the publishing industry after graduating.