This blog post is among the winners of the Department of Comparative Literatures’s 2020-2021 Blog Award for the module 6ABA0013 ‘Ethiopia and the Horn of Africa in Global Cultural Studies’. Congratulations to Anna Haslam for winning the award!

To begin to understand what modernity is and who made it, we must draw our attention to two key frameworks of thought: diffusionism and co-constitution. Both theories seek to determine how modernity has developed across the world. Growing up and seeing Europe as the centre on a world map only enhances our unconscious bias that Europe was the home to the phenomenon of modernity. Diffusionism pushes this narrative. Co-constitution does not deny the fundamental importance of European thought in the making of the global Enlightenment, but it makes the point that we cannot continue to ignore evidence of a global Enlightenment with origins across the world spanning the 17th and 18th centuries.

Colonialism acted as the vehicle by which these peripheries would gain modernity. So can we thank colonial expansion for the modernisation of the world? The movement of modernity, transported by colonialism, is said to have bought social, economic, and political progress to other ‘less developed’ areas of the world. For supporters of imperialism, this was a good thing to ‘civilise’ what was seen as ‘uncivilised’ nations. However, the invasion of these new countries caused conflict and instability. Whichever way colonial intervention is perceived, as good or bad, both views are diffusionist and imply that modernity originated in Europe.

Co-constitution is the theory that modernity was globally co-produced, and that those outside of Europe crucially contributed to the making of modernity. Co-constitution is the direct opposite of diffusionism, there are no centres and no peripheries, each country has it’s own mutual influence because no one invented modernity independent of outside influences. Our thoughts and ideas are always shaped by inputs coming from near and far, and by what has come before us. This leans on our identities being relational rather than essentialist.

Co-constitution and the Enlightenment

The ‘age of enlightenment’ in Europe is considered the hallmark of philosophical modernity, and it is too often described as an autonomous achievement of European intellectuals. Historians like Conrad point out the important enlightenment contributions from other places in the world, such as 17th-century Ethiopian philosopher Zera Yacob. The ideas of the Enlightenment, of modernity and socio-economic progress, are a global making of cross border interactions. Conrad dismisses the obsessive ‘quest for origin’ attached to the Enlightenment. Cultures and people are subject to change, they are not statutory, meaning no one can claim to have created modernity. He completely reimagines the enlightenment from this global perspective.

The debate: diffusionism versus co-constitution

Co-constitution argues that the philosophy of modernity was a global effort. However, non-western efforts in building the modern era were erased through western public consciousness, since Euro-American schools study the Enlightenment as an exclusively European phenomenon. These erasures occur from Eurocentisicm, the idea behind diffusionism. This idea behind diffusionism that modernity developed in a self-enclosed environment can be easily debated in light of a globalised world. There is evidence of a co-dependent relationship between East and West on the development of ideas. There are cases when European philosophy has defined itself in response to non-western thought. This is a distinct reversal from diffusionist thinking where Europe exclusively influences the peripheries. Wendy Belcher names this process ‘discursive possession’. What the diffusionist model fails to see is that other continents can produce their own discourse, and how they narrate their own history and culture consequently defines how Europeans represent them in our own narrative. Therefore European thought does not develop in isolation but is constitutively informed by the ideas and discourses of non-European actors.

The varying examples of modernity worldwide make it impossible to deduce whether modernity emerged through diffusion or co-constitution. Elements of diffusionist thought can be seen in the Western ‘need’ to bring democracy to other areas of the world, for example the invasions of Iraq in 2003 and Afghanistan in 2001. It can hardly be said that these invasions were successful. Ethiopian intellectual Gäbrä-Həywät Baykädaň tackles this nuance of the origins of modernity by comparing Ethiopia and the west. He says that although some innovations of modernity may have come from Europe to other nations, it does not mean they could not have been created somewhere else also, nor does it mean that Europe owns these concepts.

Ideas of modernity are constantly changing, and in an increasingly tumultuous year, concerning Brexit in the UK and Covid-19 globally, it is impossible to predict what the modern world will look like even in months to come. As modernity emerged a product of global interactions, modernity will continue to be defined by how we react as cultures and nations to world events. 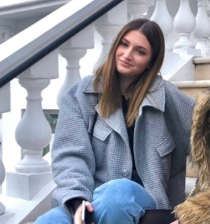 Anna Haslam is a third-year Comparative Literature student and looking to work in journalism and public relations in the private or public sector. This reflects her interests in current affairs and global cultural studies. She is currently working on her dissertation on disease as a socio-political metaphor in 20th century European literature. Alongside this, she is a member of the university chaplaincy book group and enjoys discussing and debating the content of what they are reading.