Challenges in accessing healthcare and generally poorer experiences of primary or cancer care among sexual minority cisgender women* remain important health issues. Cervical cancer risk is higher in women who have sex with women but it’s unclear if this is because of variation in HPV and other risk factor prevalence, or disparities in screening history. In a recent publication, Saunders et al (with Jo Waller & Laura Marlow of the Cancer Prevention Group) looked at self-reported participation in screening for cervical cancer among women who have sex with women compared with women who have sex exclusively with men, and whether any observed differences are reflected in cancer screening rates for other cancers as well. Additionally, the authors looked at the prevalence of high-grade cervical intraepithelial neoplasia (CIN3) or cervical cancer (obtained from the UK Biobank) among WSW compared with women of other groups.

Through questions on sexual history and lifetime partners, women from four different groups were identified & compared in the study:

1) women who have sex exclusively with women (♀♀)

3) women who have sex exclusively with men (♀♂)

4) women who have never had sex.

The findings show that ♀♀, ♀♀♂ and women who have never had sex are less likely than ♀♂ to attend cervical screening. 45.7% of women with no history of sex with either men or women reported never having attended cervical screening, compared with 10.5% for ♀♀, 1.6% of ♀♀♂ and 1.3% of ♀♂. ♀♀♂ and women who have never had sex also had lower breast screening uptake compared with ♀♂. No difference was shown between the four groups for bowel cancer screening uptake.

Women of all reported sexual histories were represented among both CIN3 and cervical cancer cases. Women who had never had sex had a 10-fold lower risk of being diagnosed with (CIN3) compared with ♀♂, the prevalence of CIN3 was 0.1% versus 2.7% respectively. ♀♀ or ♀♀♂ with a history of no male partners or only one male partner had a twofold increase in CIN3, at 1.91 for no male sexual partners, and 2.25 for one male sexual partner, compared to ♀♂ with a history of only one male partner. Figure 1 shows a breakdown of the risk of CIN3 for groups included in the study, by number of sexual partners. 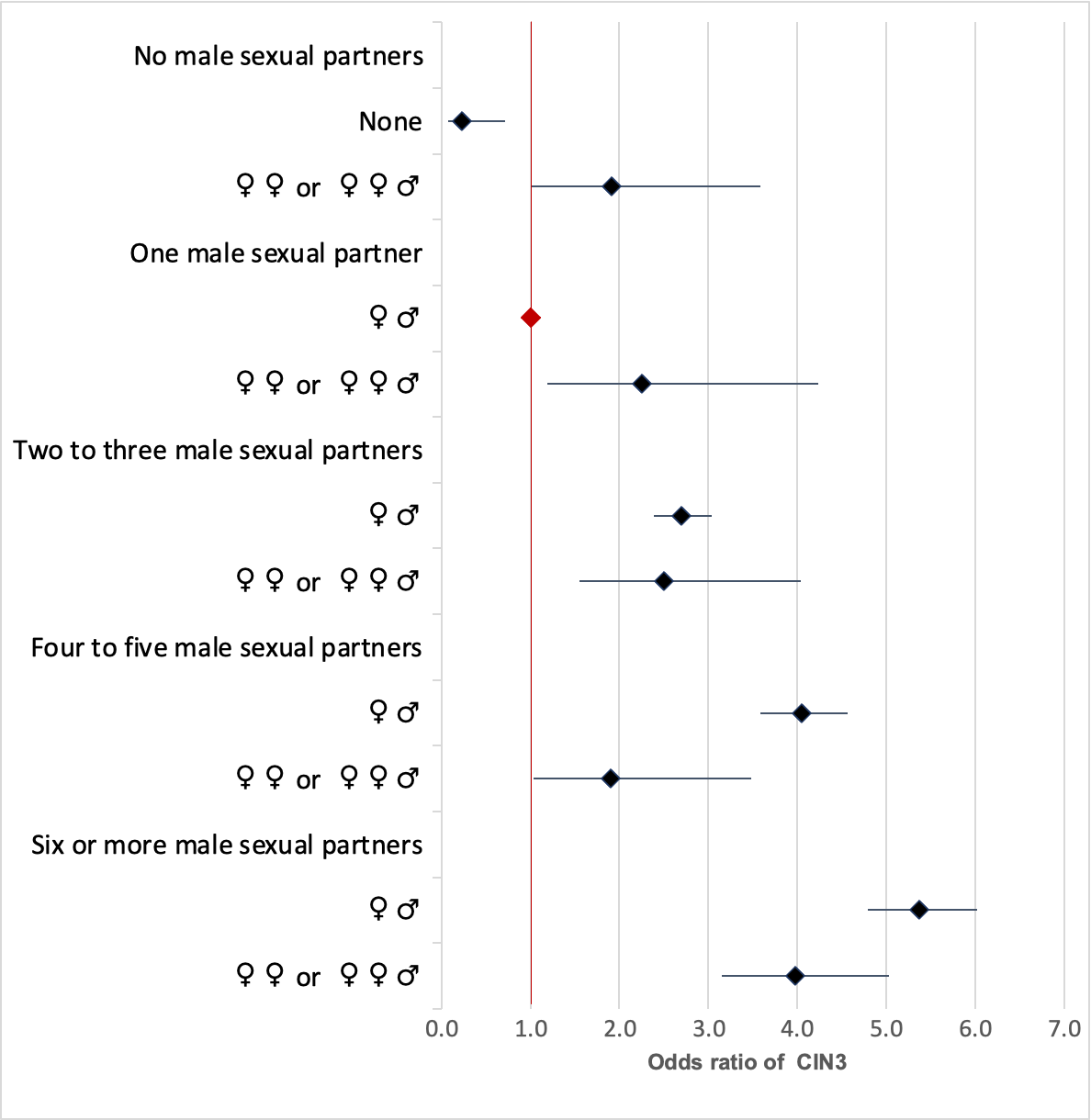 Implications for the future

Finding that ♀♀ and ♀♀♂ with a single or no male partner have a higher prevalence of CIN3 when compared with and ♀♂ who have had a single male partner suggests there is risk of HPV transmission associated with ♀♀ sex, highlighting the importance of screening among these sexual minority groups. Furthermore, these results show the necessity of policy interventions to improve uptake of cervical screening among women who have sex with women overall. Self-sampling is a promising new way of HPV screening, which allows people with a cervix to test themselves at home. In the context of this analysis, self-sampling may help those who have fallen through the gaps when it comes to cervical screening and overcome some of the barriers of speculum-based screening.

*While this paper focused on the experiences of cisgender women, it is important to remember that barriers remain for transgender men and people with a cervix seeking cervical screening, and more research is needed in to how to reduce these. You can read more about how cervical cancer screening can be transformed for the transgender population here.